Libraries for people, not for books: an exchange of library experience in Europe

At the end of November 2022, library specialists from the Vratsa and Vidin regional libraries (part of the Global Libraries – Bulgaria network) visited five libraries in Oslo, Norway.

The trip to Norway was organized as part ofthe “Book paths and mobile libraries from North-West Bulgaria to Scandinavia” project, within the general framework of the EEG’s Financial Mechanism  “Cultural Entrepreneurship, Heritage and Cooperation”programme. 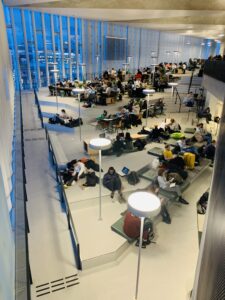 The Bulgarian representatives visited various cultural institutions including: the National Library; the Deichmann Björvika Library (the largest public library in the country, which was the recipient of the IFLAand Systematic Public Library of the Year award in 2021); “Grüneloka” –  chosen as Norway’s greenest library and the library for teenagers – Deichman Biblo Tøyen.
These visits provided the first impressions of the institutions in the Nordic country – Libraries are for people, not for books .

For a long time now in Norway people have been visiting libraries, not primarily in order to read, but rather as places for relaxation – to meet friends, drink a cup of tea, relax in a cozy environment, learn something new, listen to music, watch videos, play games. You can communicate calmly in these spaces without anyone telling you to keep quiet, because there are specially designated areas for reading and group work where silence is maintained. Libraries impress with their buildings, with interior solutions that create the sense of a home with many visitors. Also, libraries consistently interact with local and national governments, and politicians rely on them as key actors intackling problems such as social inequality, migration and illiteracy. 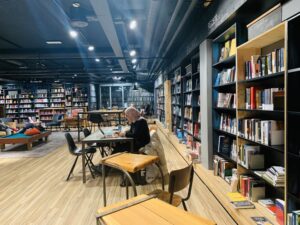 Services cover a wide range of needs of different communities – key access outside library opening hours, workshops on various topics, language courses, debates and concerts. There are libraries where you have totake off your shoes, where you can cook food or grow herbs, draw, do a puzzle or build with lego – and theseare far from all that is offered to visitors.

Among the participants in the Bulgarian group was Spaska Tarandova, Executive Director of the Global Libraries – Bulgaria Foundation, who believes that the most valuable part of such an exchange of experience is the opportunity to see in practice how libraries today increasingly focus on people, and not on their book collections: “The concept that is increasingly gaining ground in world practice, and Norway is one of the leading countries developing in this direction, is that libraries should be seen as a public ‘agora’ or community public hall, or that libraries should be the third place after the home and the office. It is the intersection that enables people to access the core principles of public libraries: access to information, access to knowledge, access to culture and socialization. The role of libraries as places for socialization and communication is extremely important today, and hence for expressing opinions and positions and for developing the sense in people that the development of society depends on each one of us … What our colleagues saw in Oslo is that libraries adapt their environments to feel more like home, and in this way they stimulate people to read, to develop, to communicate, to discuss, and to share. Books are additional tools that provide food for the mind… So we must make the environment in our libraries as welcoming as possible to our users… I sincerely hope that it becomes possible in the next two or three years. Bulgaria’s Recovery and Development Plan, which will begin implementation in 2023 and continue over the next three years, is related to creating an environment for the inclusion and social integration of the maximum number of citizens and members of our society – and the most direct way for this to happen is through the country’s public libraries.” 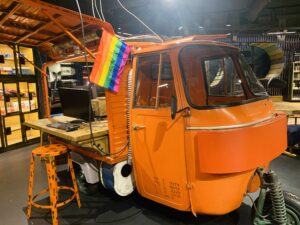